'I want Amari to be kind and compassionate and gentle towards everyone, we need more of that.' 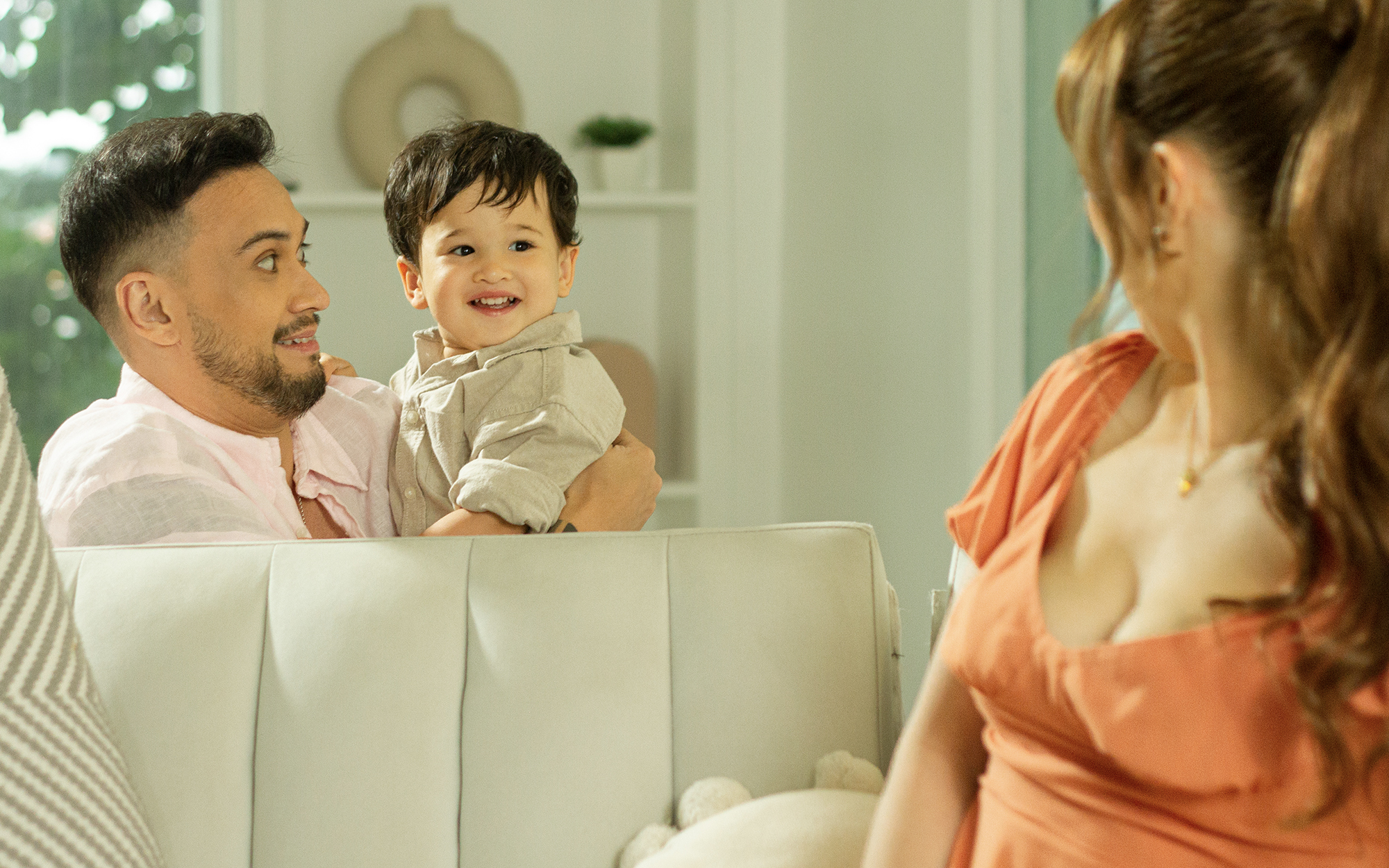 Two years into exclusively breastfeeding and entering into the toddler years of parenting, Coleen Garcia Crawford says motherhood has taught her many lessons. But the biggest one has nothing to do with Amari, and everything to do with herself.

"Oh. My… Goodness!” shout Coleen Garcia Crawford and Billy Crawford in unison as the doors of the studio slowly slid open and their almost two-year-old son Amari walked into Smart Parenting’s cover shoot. The celebrity parents’ energy and faces lit up instantly at the sight of their son, and his as well.

It is evident, as one watches the Crawfords just being together, how much sunshine Amari brings to their family. But what’s just as undeniable is the instant switch that happens to the couple when they’re with their son. From Coleen and Billy, in-demand celebrities, to Coleen and Billy, mom and dad.

“She’s amazing. She’s changed completely. She’s matured in an unbelievable way,” says Billy of his wife of four years. “She’s way smarter than I am. She’s a woman full of strength and sacrifices, so I have all the respect for her. Wala na akong masasabi,” says the host, singer, and actor. 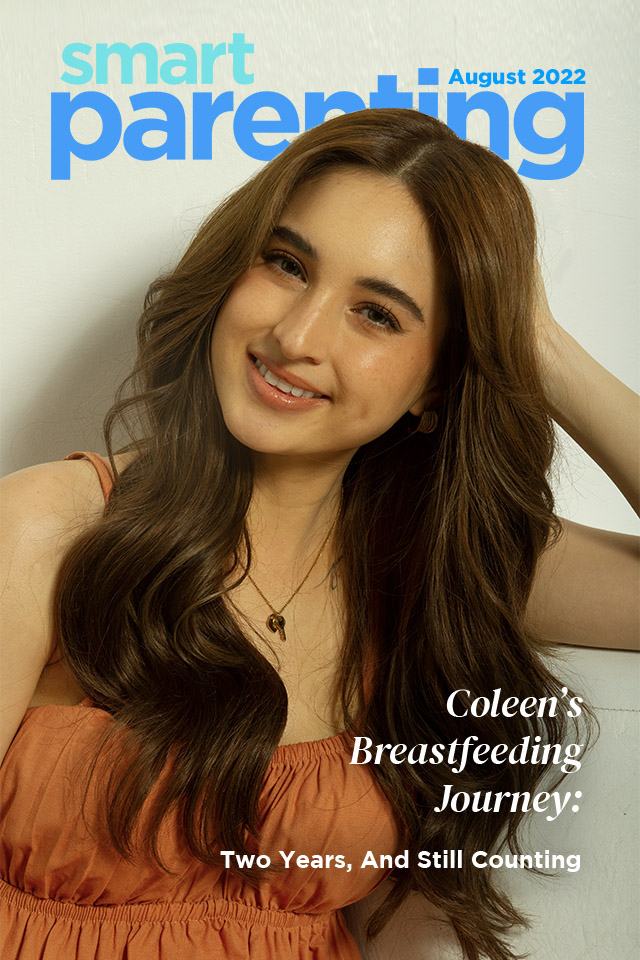 Billy and Coleen were married in 2018 and in September 2020, Amari was born. Coleen delivered their son through an unmedicated home water birth. Since then, Coleen has amazed and inspired other ‘padede’ moms through her breastfeeding journey because of her commitment and sacrifice.

On her Instagram, she’s shared countless photos and stories of her nursing Amari wherever they are—on the bed, in the middle of the ocean, at a shoot, on a boat. Which is why there was no one else on Smart Parenting’s list to celebrate Breastfeeding Month this August than Coleen.

'[Coleen's] amazing. She’s changed completely. She’s matured in an unbelievable way. She’s a woman full of strength and sacrifices, so I have all the respect for her.' –Billy Crawford

But as Coleen shares, breastfeeding didn’t start out so easily for her and Amari. Her body was not cooperating right after she delivered him.

Today Coleen continues to breastfeed Amari, who’s turning two next month, and he enjoys nursing on demand. Which meant that once he arrived at the shoot, any time he wanted to latch, Coleen would stop what she was doing to allow him to nurse whether she was retouching her makeup, being interviewed, or waiting for their turn to take photos. 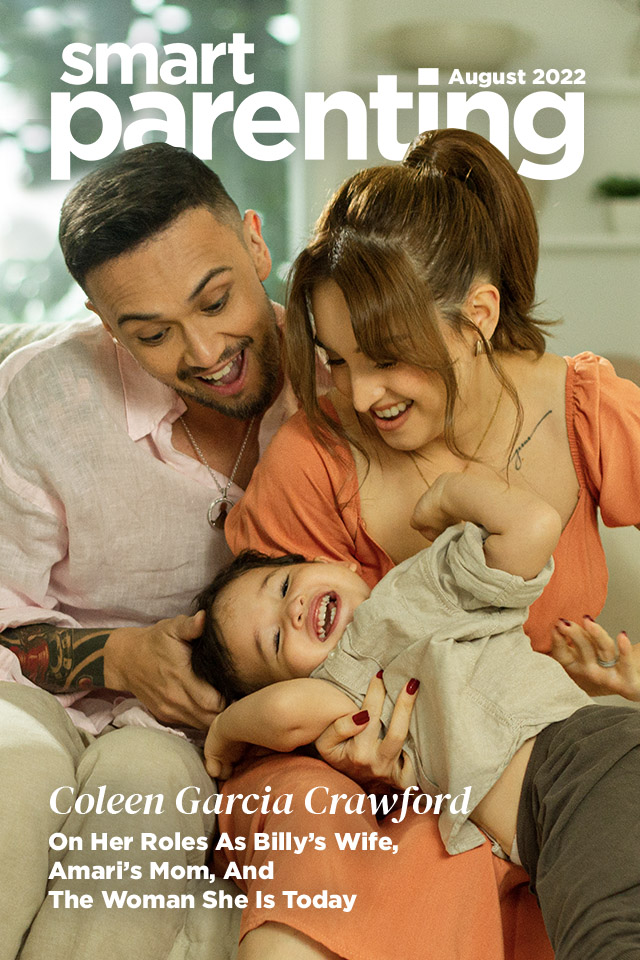 “I’ve always breastfed on demand, I’ve never had a schedule. I never limited him. I never said stop or enough na, so it’s always unli-latching for us. And that can take a toll on a person,” Coleen says.

“I have to admit that there are some days when I just can’t stand it. Especially when I’m exhausted,” she says. When their family got sick with Covid, Coleen says it was extra hard on her because she was sick but had to take care of and breastfeed him still.

'There are days I don’t enjoy [breastfeeding], it doesn’t mean I’m going to stop.'

“You have to come to terms with that, acknowledge how you really feel, and embrace it, accept it, and don’t take it as a failure or as a sign of weakness, but as something so normal and so natural.

“Like I said, there are days I don’t enjoy it, it doesn’t mean I’m going to stop,” she says.

To celebrate her upcoming 30th birthday and Amari’s second birthday, the Crawfords are getting ready to fly to France. The family of three will be on their own and Coleen is anticipating that this might just be her biggest parenting challenge as of yet. 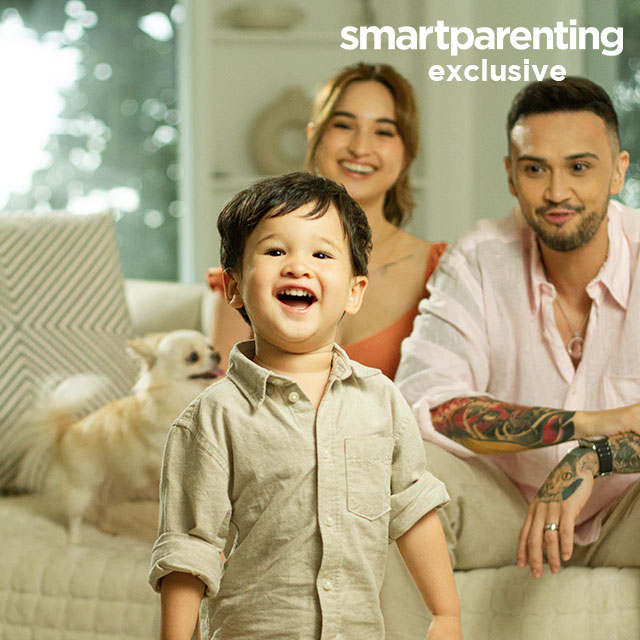 “I’m excited because we’ll be able to go out more,” Coleen says. “Right now, it’s really sunny [in France], and where we’re staying, there are a lot of parks nearby. So I’m excited for that. I’m excited to explore, have breakfast with him in cafes, even if it’s just the two of us. I’m excited to find that rhythm, na it’s just us.” Billy will be working but Coleen won’t be, so she’s getting ready to do everything for Amari by herself when she takes a break, from cooking, to bathing, to cleaning up after him.

But what about those long flights? How do they plan on entertaining a toddler for a long haul flight?

Coleen says Amari does not get zero screen time, but it’s definitely not their first choice for distracting him. “It’s our break glass in case of emergency,” she says. Like most kids his age, Amari enjoys Ms. Rachel’s Songs For Littles and Coleen tells Smart Parenting Editor-at-Large Rica Peralejo-Bonifacio in their interview that when they do allow him screen time, they watch with him and interact with him while he’s watching.

'I feel like there’s a gentle approach to everything, it’s just a lot harder.'

They’ve also used it to distract him from a recent fascination, mall escalators, which they also don’t want him to play too much on for his safety. “It’s saved us during those desperate times,” she says.

Gentle Parenting all the way

Now that Amari’s entering the infamous toddler years, how are Billy and Coleen parenting Amari? Coleen says that during the time of the interview, the two-year-old’s recent discovery was spitting his water and food, which he finds very amusing.

“We thought it wasn’t going to happen, because he’s so behaved,” says Coleen. “I don’t want naman to kill his joy, to get mad at him, but at the same time we have to discipline him.”

Coleen says she believes in gentle parenting, “all the way. ‘Yun nga it’s the road less traveled, so it’s very hard,” she says. The young mom recognizes that spanking is normal in Philippine culture and in many other cultures globally but it’s not something she wants to put Amari through.

On her biggest parenting lesson: 'to do the inner work, and to heal what needs to be healed, because I don’t want any of it to carry over to Amari.'

“It’s about finding that balance between teaching your child discipline and not really offending him so much, not really making him cry or hurting his feelings… I feel like there’s a gentle approach to everything, it’s just a lot harder,” she says.

She says that even if Amari’s still young, she and Billy make sure to always talk to him about why he can’t do certain things or needs to adjust his behavior. “We try to talk to him like an adult as much as we can, like Billy’s doing right now,” she says. Just as Coleen was explaining their parenting style, Amari was coaxing Billy to play at the garden area of the studio but he couldn’t because their family was still shooting with Smart Parenting.

“We know he’s too young to understand but I also think you shouldn’t underestimate children because they understand more than you think. Eventually they’ll understand,” she says.

Billy confesses that he’s more of the disciplinarian between the two of them, but he’s also the fun dad. “I discipline him by giving him a face,” Billy says. “When he plays and becomes naughty, I’m the disciplinarian. I don’t usually care if he cries or what not. I’m more of that.” 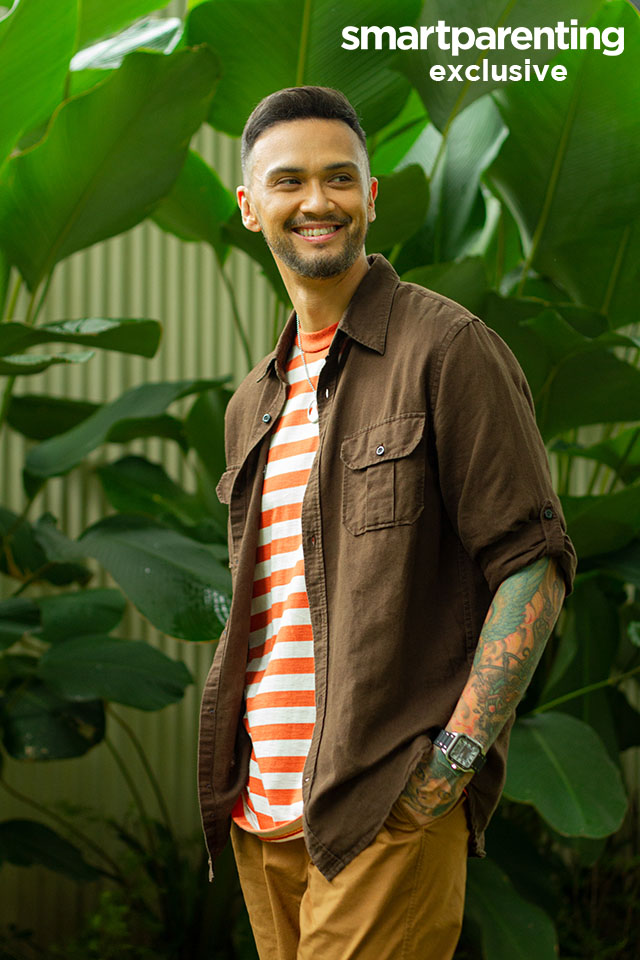 “What I love is Billy trusts my instincts. So if there’s something na hindi niya maintindihan, he’ll just trust me anyway. He’s very much like ‘Lead the way' with parenting,” she tells Rica Peralejo-Bonifacio during their Poprica video interview.

“But if there’s something na he doesn’t normally agree with it or doesn’t understand, he’s so open to hearing why and why it’s necessary and he still practices it as well. So he respects what I think, but he also has a lot to put in as well. Parang he respectfully disagree,” she says.

'[Billy] respects everyone, he treats everyone the same, pantay-pantay lang. And I’d love for him to get that from his dad.'

If they do disagree, it’s because both Billy and Coleen are exhausted from being young parents to a toddler. “If there are any fights, it’s usually because we’re so overcome by stress and fatigue,” she says. Any first-time parent will remember this feeling well.

“I want him to be kind and compassionate and gentle towards everyone, we do need more of that,” says Coleen about what she hopes for Amari. “As generations pass and time passes, people think that we’re becoming a more sensitive culture, more sensitive generation, and I’m here for it. I think it’s about time that we become more sensitive towards other people, especially those who have been trampled on for so long now. So I’m glad na kahit papaano, we’re becoming more socially aware.”

“I feel like if I raise him in a gentle way, he’ll be gentle to other people as well,” she says. 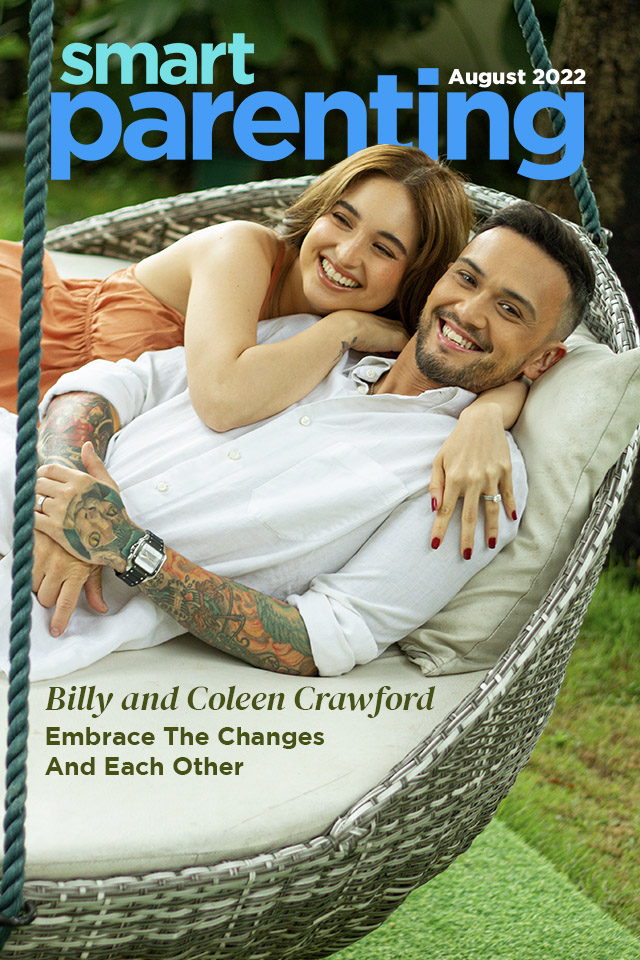 Coleen says that she hopes that Amari would be able to adopt Billy’s ways and outlook, able to treat people equally no matter their belief, gender orientation, or background. “He respects everyone, he treats everyone the same, pantay-pantay lang. And I’d love for him to get that from his dad,” says Coleen.

She adds, “I’m so glad that Billy doesn’t have that toxic masculine mindset. Billy’s never been insecure in his own sexuality, he’s never been afraid to express his feminine side. And I want Amari to be like that, he knows who he is and so he’s confident. And he doesn’t feel like he needs to fit inside the box.”

As an almost two year old mom, Coleen struggles to find just one major lesson she’s learned now that she’s a mom. And she says that becoming a mother has taught her to work on herself.

“Probably to adjust myself,” she says. “We have to live by example. To teach them by example. Because they’re not going to be molded by what we say, it’s always by what we do. So it’s always to watch myself and to adjust. And to really work on myself, to do the inner work, and to heal what needs to be healed, because I don’t want any of it to carry over to Amari.”

From where we stand, it looks like Amari is definitely off to a wonderful start. 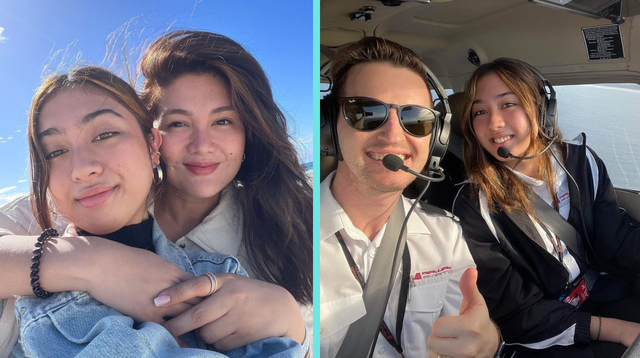 Carlo Aquino's Ex-Girlfriend Trina Candaza On Co-Parenting: 'Kung Saan Nalang Okay Ang Lahat' The 26-year-old model said, she is not closing her doors for them to become a family again.
Share Read More